Toyota officials are gleefully correcting some bad fuel efficiency info they shared last week during a press preview of the 2017 Prius Prime plug in hybrid. They assured members of the automotive media that the 2017 Prius Prime  would get a segment-leading EV mode fuel efficiency rating of 124 MPG-e from the EPA. Today the automaker said the official EPA numbers are in and their estimate was wrong. The agency has rated the Prime at 133 MPG-e.

That’s a 7.25 percent boost from the initial estimate and makes it even harder for the opposition to catch up. 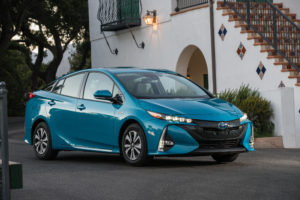 MPG-e is the EPA’s way of comparing an EV or PHEV’s kilowatt consumption per mile traveled with a gas cars miles per gallon.  The “e” stands for “equivalent,” as in MPG-equivalent. The higher the number, the more efficiently the vehicle uses its electric drive system.

The 2017 Prius Prime, which goes on sale in late November, delivers up to 25 miles of all-electric range before defaulting to a standard gas-electric hybrid operating mode, and the EV efficiency rating means that it consumes the electrical  equivalent of 0.188 gallons of gasoline over that distance.

A gallon of gasoline caries the energy equivalent of 33.7 kWh of electricity, so the Prime would use about 6.3 kWh to travel 25 miles. That’s 25.3 kWh for 100 miles (the Prius Prime only has an 8.8 kWh battery and only about 75 percent of the battery’s charge is available to power the car, so it can’t go 100 miles on a single charge, but if it could…). By comparison, the next best PHEV, the BMW i3 REx with gasoline range extender, is rated at 117 MPG-e or 29 kWh per 100 miles, and the all-electric BMW i3, the most efficient of the battery electric vehicles sold in the U.S., is rated at 124 MPG-e or 27 kWh per 100 miles.

Other EPA ratings estimated by Toyota last week remain unchanged now that the official numbers for the Prius Prime are out: 55 mpg city, 53 mpg highway and 54 mpg combined in hybrid mode, and 25 miles of all-electric range.