BMW says it will launch its long-anticipated 7 Series plug-in hybrid in August, with a U.S. price tag that will start at $90,950.

BMW builds great cars, but it really does need to work on its nomenclature. Just try dropping that last model’s moniker casually into conversation:

“ Hey, Joe, how’s the wife and kids? Things are fine at our place except I’ve gotta clean out the garage to make room for our new long wheelbase, all-wheel drive, plug-in hybrid BMWLe xDrive iPerformance.  Whew! Gimme a minute to catch my breath.”

The new flagship BMW 7 Series PHEVs will use a turbocharged inline four-cylinder engine and an electric motor to deliver up to 326 horsepower and 369 pound-feet of torque. Power is transferred to the wheels via an eight-speed automatic.

The 7-Series iPerformance cars will be able to travel a decent distance in all-electric drive (U.S. figures haven’t been disclosed, but the all-electric range on the European test schedule is 27-30 miles for the standard drive models and 25-28 miles for the all-wheel drive version. The U.S. rating test features more high-speed highway driving, so all-electric range typically is 10 percent to 20 percent lower for cars produced and tuned for the U.S. market). 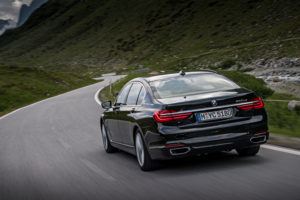 BMW says drivers will be able to select drivetrain modes with an “eDrive” button. The default “Auto” setting maximizes range by blending use of the gas engine and electric motor, while the “Max” setting keeps the car in all-electric mode for speeds of up to 87 mph or until the accelerator pedal is mashed to the floorboards.

There’s also a battery control system that enables the car’s on-board charging system to maintain the battery charge at driver-selected levels of anywhere between 30 percent and 100 percent. This is to permit the driver to save electric power for city driving while forcing the car into an ICE-only mode on the highway. It’s a function that’s most useful in countries that have  “quiet” zone and zero-emission areas in their cities. It’s also good to ensure you’ve enough battery left to sneak home in near-silent electric drive late at night when you don’t want to disturb the neighbors or alert your spouse to your late arrival.

An adaptive driving mode bases powertrain and suspension setting on cues gleaned from the driver’s use of brake, accelerator and steering wheel and even from the route that’s input to the car’s standard navigation system.

Like the new 2016 7 Series on which they are based, the 7 Series PHEVs will feature a lights weight carbon-fiber chassis.  With one exception, the rest of the package is the same – standard and optional features – as on the conventional 7 Series cars. The exception is that the electrified iPerformance models come with auxiliary heating and cooling as standard equipment. The system allows the driver to preheat, or pre-cool, the cabin using power from the grid while the car is still plugged in, saving battery power for the drive.

BMW says the 7Series PHEVs can be charged in under 4 hours from a 220-volt circuit.