The Ioniq, one of a family of electrified sedans Hyundai will be introducing under that model name (there also will be a battery-electric Ioniq and a plug-in hybrid model) was rated at 57 mpg on  the city driving cycle and 59 mpg on the highway cycle. 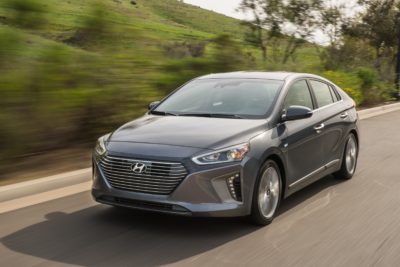 The Ioniq Hybrid, a five-passenger sedan, is powered by a 1.6-liter gas engine coupled to an electric motor that draws its power from a 1.56-kWh lithium-ion battery. Power is delivered through a conventional six-speed dual-clutch automatic (versus the continuously variable automatic transmissions most hybrids use). Combined output is 139 horsepower.

Hyundai has said it intends to become a world leader in plug-in and fuel-cell electric vehicle offerings.

In addition to its already announced Ioniq models, the California-only Tucson fuel-cell electric SUV and the Sonata hybrid and plug-in hybrid models, Hyundai says it will introduce a new EV with at least 200 miles of range by 2018.

Globally, the company intends to have 10 conventional hybrid, eight plug-in hybrid, five EV and two fuel-cell electric models in the market by 2020.