Ford Has A Better Idea in Automotive Plastics

Greenhouse gasses, usually lumped together under the “CO2” label, are among an automaker’s worst enemies. But Ford Motor Co. is looking at waste CO2 in a new way – as an asset rather than an environmental liability. 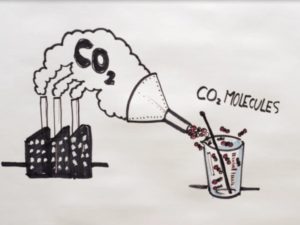 The automaker announced today that it is formulating and testing new CO2-based foam and plastic components for its cars and trucks. It expects to have them in production vehicles by 2021.

Ford sustainability specialist Debbie Mielewski said using waste carbon dioxide as a feed stock for polyols – a key component of polyurethane composites –is part of the automaker’s ongoing campaign to reduce its carbon footprint. Currently, polyurethane foams can be found in seats, armrests and headrests of most cars, but also within the bodies of cars, where their insulation properties provide protection against the heat and noise of the engine. The new CO2-based materials could also be used in seats and various underhood components in the company’s vehicles, she said.

The automaker, which previously developed and now uses soy-based foam in all of its vehicles in a project led by Mielwski’s biomaterials research team. Ford began work with a variety of suppliers, universities and chemical companies in 2013 on re-use of CO2 captured from various manufacturing operations.

It has now begun using a CO2-based polymer produced by one of those partners – Novomer – in test components made of foam and plastic; components Ford says are easy to recycle and that could potentially reduce annual use of petroleum-based automotive foams and plastics by 600 million pounds.