Tens of thousands of California clean air decal holders will lose their cherished “single occupant” access to the state’s carpool lanes at the end of this year – unless they buy or lease a new qualifying plug-in hybrid or zero emissions vehicle.

California legislators last year passed a bill creating a new, rolling, three-year Clean Air Vehicle decal plan that eliminates eligibility for all vehicles with the green or white decals issued before Jan. 1, 2017. The stickers permit the cars to be legally operated in carpool lanes with only one occupant. 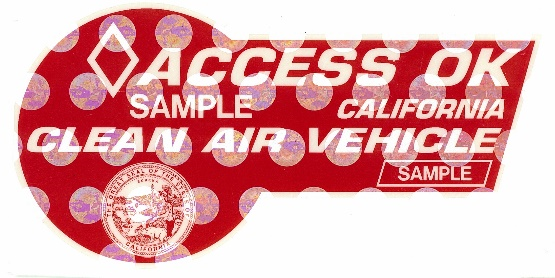 The new decal program is intended to mitigate carpool lane congestion as more and more low- and zero-emission cars and trucks are sold by reducing the number of one-occupant cars entitled to use the state’s high occupancy vehicle, or HOV, lanes. Under the new rules all green and white clean air vehicle decals awarded before Jan. 1, 2019 will expire on that date.

Because California only issues the decals one time per vehicle, only qualifying vehicles with stickers issued since the cutoff – or older qualifying vehicles that never before had a sticker – can get one of the new decals. HOV access stickers are highly valued by urban motorists trying to cope with the state’s jammed freeways.

In the early days of the program, when conventional hybrids were allowed to participate in the California clean air decal program, used Prius models with clean air stickers typically sold for about $4,000 more in California than comparable models without the decals.

Under present rules, only plug-in hybrids, battery- and fuel-cell electric vehicles and vehicles powered by dedicated compressed natural gas engines (not bi-fuel models), are eligible for the stickers.

The state has been issuing a temporary sticker, colored red, since March 2018. Vehicle owners who have one of those are good until Jan. 1, 2022.

Owners of qualified vehicles who were issued white or green decals between Jan. 1, 2017 and March 2018, will have to apply for a new sticker that also will be good until Jan 1, 2022.

None of the stickers can be renewed, and unless extended by the legislature the program ends Sept. 30, 2025, when all decals issued after the start of 2022 also will expire.